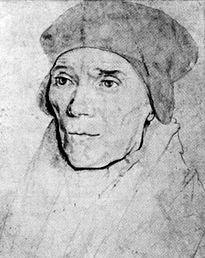 St. John Fisher, by Hans Holbein the Younger
"...a public outcry was brewing among the London populace who saw a sinister irony in the parallels between the conviction of John Fisher and that of his patronal namesake, Saint John the Baptist, who was executed by King Herod for challenging the liceity of Herod's marriage to his brother's widow, Herodias. For fear of John Fisher's living through his patronal feast day, that of the Nativity of St. John the Baptist on June 24, and of attracting too much public sympathy, King Henry commuted the sentence to that of beheading, to be accomplished before June 23, the Vigil of the feast of the Nativity of St. John the Baptist. His execution on Tower Hill on June 22, 1535, had the opposite effect from that which King Henry VIII intended. John Fisher's beheading created yet another ironic parallel with that of the martyrdom of St John the Baptist whose was also beheaded."
"Bishop John Fisher's last moments were thoroughly in keeping with his previous life. He met death with a calm, dignified, courage which profoundly impressed all who were present. His body was treated with particular rancour, apparently on King Henry VIII's orders, being stripped and left on the scaffold till evening, when it was taken on pikes and thrown naked into a rough grave in the churchyard of Allhallows, Barking. There was no funeral prayer. A fortnight later, his body was laid beside that of Sir Thomas More in the chapel of St. Peter ad Vincula in London. The bishop's head was stuck upon a pole on London Bridge, but its ruddy and lifelike appearance excited so much attention that, after a fortnight, it was thrown into the Thames, its place being taken by that of Sir Thomas More, whose martyrdom occurred on July 6."
(Source)
Look at the Catholic witnesses in England and pray, for our time is approaching.
Act of Resignation
O Lord, my God, from this day I accept from your hand willingly and with submission, the kind of death that it may please you to send me, with all its sorrows, pains, and anguish. Into your hands, O Lord, I commend my spirit. Do with me what You will. Amen+
Posted by Sanctus Belle at Thursday, June 26, 2008