Our Lady of Siluva II 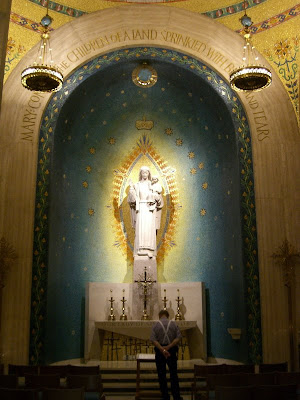 Picture from a US shrine of Our Lady of Siluva
(photo credit)
God miraculously intervenes
Eighty years passed and the Catholic flock, with no shepherd to guide and nourish it, gradually died out. Only a few of the very oldest villagers dimly remembered that there had been a Catholic Church in their village. Children were reared in the Calvinist creed. Suddenly, through an apparition of the Blessed Virgin Mary, God miraculously intervened. This apparition has been proven an actual event, authenticated by a Papal Decree issued by Pope Pius VI on August 17, 1775. The most remarkable feature is the fact that the miracle took place in a completely un-Catholic atmosphere.
Children see a beautiful woman on a rock
One summer day, in 1608, a number of children were tending their sheep in a field on the outskirts of the village of Siluva. They were playing near a large rock, close to a wooded section of the field, shouting merrily to one another in carefree fun. Suddenly one after another stood transfixed, staring in the direction of the rock. In the silence, there could be heard the sound of loud sobbing. Then the children beheld a beautiful young woman standing on the rock holding a baby in her arms and weeping bitterly. Her overwhelming grief was only too evident. She did not speak, but looked at them sadly as she stood there, weeping as though her heart was breaking. So profuse were her tears that they ran down her cheeks and some of them splashed on the rock. The woman was dressed in flowing blue and white robes, unlike any costume with which the children were familiar. Her long, light-brown hair fell softly over her shoulders. A strange light surrounded both the woman and child.
Boy runs to Calvinist pastor
So startled were the children, they could not speak, but merely stood and stared. Amazement soon turned to fright when the woman with her baby disappeared as mysteriously as she had appeared. Then all began to talk excitedly about what they had seen. One of the boys ran to the village to tell the Calvinist pastor. He was told to stop making up such a fantastic tale and to go back to the fields.

Children tell their parents
When the children returned home in the evening, they told their parents and neighbors about the weeping woman. The news spread quickly through the little village, and the next morning most of the townspeople had gathered around the rock. Some were scoffing loudly, but others were impressed by the children's tearful insistence that they were telling the truth. This was proven because, whether the children were questioned separately or together, each told the same identical story, even to the smallest detail.
(source)
Posted by Sanctus Belle at Thursday, June 12, 2008

If this is in Lithuania, why are all the labels in the photo in English?

Thanks for this story; I am looking forward to the next installment!

Irene, that's a very good question and one I don't have an answer for. I came across the picture by googling Our Lady of Siluva. I'll check it out, thanks for your comment.

I posted a photo credit now. Its someone's photo that's been posted to Picaso for public viewing. Looks like it was taken in DC - perhaps at the Shrine of the Immaculate Conception? Must be an American Shrine to Our Lady of Siluva. If anyone knows more, please comment.

The photo shows the shrine of Our Lady of Siluva in the Basilica of the National Shrine of the Immaculate Conception in Washington D.C. I visited there a few years back and stopped in that chapel. It is very beautiful!