Our Lady of Siluva VI 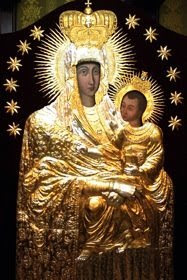 Why aren't these apparitions well known??
It may be asked why these apparitions are not better known in the Catholic world. Remember, in 1795, at the time of the Great Partition, Lithuania was taken over by Russia. Until 1904, Russia ruled with a very heavy, austere hand. It was forbidden to teach the Lithuanian language to anyone. The Lithuanian press was suppressed. No religious books could be printed. No one could travel to any distant place without special Russian permission.
In 1904, impatient with bearing these austere restrictions any longer, the Lithuanians rose in revolt against their Russian oppressors. Russia lost no time in quelling the revolution, but a number of restrictions were removed and Lithuania was given more freedom.
Pilgrimages to Siluva were resumed an organized basis in 1905. Many of the pilgrims took part in processions on foot to Siluva. It is a known fact that in the first year after the revolution of 1904, over 30,000 people visited the shrine of Our Lady of Siluva in organized pilgrimages.
In more recent times, perhaps one of the chief reasons that the Apparition was not recognized by the rest of the world, was the suppression of Religion and especially devotion to Our Lady in Siluva by the Soviet Union, during the occupation of Lithuania. Specifically, the Soviets dramatically discouraged visits to the shrine or even mention of it in the press. When special devotions were held at the site, cars were not allowed within four miles of the shrine, and the border was patrolled by the militia. Cars parked on the perimeter of this disallowed area were towed away or heavily fined. But one way or another, the faithful still managed to attend, risking much.
The government made it difficult for pilgrims to participate in the devotions: policemen used to stop and fine drivers without any real reason and block even the smallest roads. A soviet monument replaced the statue of Mary in the Town Square. Processions at that time were strictly prohibited and their organizers and participators punished and fired from their jobs, nevertheless pilgrims still went to Siluva. Friends of the Eucharist (the members of an underground Catholic association) were especially active in organizing the processions even though KGB cars followed people on the road.
On September 8, 1991, Cardinal Vincentas Sladkevicius and the Chairman of the Parliament Vytautas Landsbergis entrusted Lithuania to the Immaculate Heart of the Blessed Virgin Mary. The act of entrustment is kept in Siluva.
(source)
Posted by Sanctus Belle at Friday, June 20, 2008