Our Lady of Siluva I 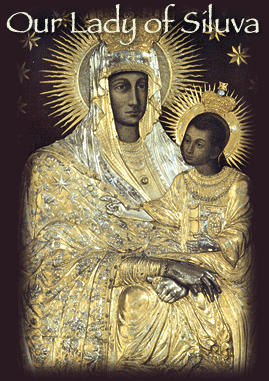 "Lithuania's Greatest Treasure"
The following posts will have Our Lady of Siluva as a topic - an approved Marian apparition I only found out about today. This is a beautiful story which I hope you will find edifying to your faith as I have.
First Widely Known Apparition of the Mother of God in Europe
Lithuania becomes the youngest daughter of the Church. In 1251, Lithuania was the last European nation to accept Christianity, becoming the youngest daughter of the Church.
There was a time when Lithuania came very close to leaving the Catholic faith. Something happened in 1608 in the little village of Siluva which turned back, once and for all, the tide of the Reformation heresy which was sweeping over Europe and threatening to engulf this little country.
Two hundred fifty years before Lourdes and Fatima the Blessed Virgin Mary appeared in the village of Siluva, Lithuania. The story begins in 1457.
The story of Our Lady of Siluva actually began in 1457, when Peter Giedgaudas, a diplomat for Vytautas the Great, built the first church in the area and gave the land to the Catholic Church. On one of his many travels he went to Rome and there obtained a magnificent painting of the Blessed Virgin Mary holding the child Jesus. He brought the painting back to Lithuania and put it in the sanctuary of the new church in Siluva.
For several generations the faithful worshiped God and honored the Blessed Mother in their little shrine church.
Calvinist Controversy
When the Protestant "Reformation" swept over Europe, not even this little village escaped its impact. In 1532, the local governor became a zealous Calvinist as did many nobility and intellectuals . . . they in turn forced their will upon the people. The Catholics of Siluva were helpless to resist the repression of their Faith by the powerful gentry. Property owned by the Church was to be confiscated and the land turned over to the Calvinists.
Parish priest hides the treasured painting
When Fr. John Holubka, the parish priest of the Siluva Church, heard what was to happen, he built an ironclad box. He carefully wrapped the treasured painting of the Blessed Virgin Mary and Child, liturgical vestments, and documents which proved that Vytautas the Great had given the land to the Catholic Church and placed them in the box. Then he sealed the box and buried it deep in the ground near a large rock. His action was truly inspired because a short time later the authorities seized the church. It seemed as if the Catholic faith had come to an end in the once fervent village of Siluva.
(Source)
Posted by Sanctus Belle at Tuesday, June 10, 2008