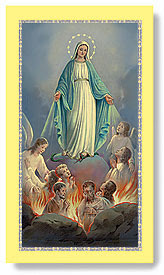 An Interview on Purgatory with Francisco Romero-Carrasquillo, Doctor of Philosophy & author of Ite ad Thomam.
Can the souls in Purgatory pray for each other?
"Theologians do not have certainty about this. This topic has been the subject of much speculation among scholastics. It is certain that the souls in purgatory can pray (in general). In fact, it is certain that they can pray for themselves, e.g., for the remission of their venial sins, for the application of the merits of the living for their salvation, etc. Now, Aquinas seems to imply that we can pray to them to seek their assistance (Summa Theologiae II-II.83.4 ad 3):"

"Those who are in this world or in Purgatory, do not yet enjoy the vision of the Word, so as to be able to know what we think or say. Wherefore we do not seek their assistance by praying to them, but ask it of the living by speaking to them."

"The souls of the departed may care for the living, even if ignorant of their state; just as we care for the dead by pouring forth prayer on their behalf, though we are ignorant of their state. Moreover, the affairs of the living can be made known to them not immediately, but the souls who pass hence thither, or by angels and demons, or even by "the revelation of the Holy Ghost," as Augustine says."
"Moreover, the Council of Vienna says of the Holy Souls that, “by their suffrages they help us.” Another ecclesial source says “we believe they pray for us to God.”A probable argument could be made that if they can pray both for themselves and for us who sojourn on Earth, it would seem likely that they are also able to pray for other Holy Souls."
More Tomorrow...
Posted by Sanctus Belle at Monday, July 30, 2007

Souls in purgatory cannot pray for each other. It's not lack of generosity, but the condition of purgatory is exclusively for the purification of the individual's soul. Because the soul in purgatory is fully aware of their soul's condition, they cannot divert any attention from their own soul, and they understand they are not in a condition to do so for another soul in purgatory. Also, it is not a collective place, so the soul does not have a view of who is in the next cubicle ;-)

Anita - well that's what I always thought too...but that's how this professor answered the question. Gives food for thought. I'm posting this interview here in pieces as he posted it all together some time ago.

I, too, was always was under the impression that the souls couldn't pray for themselves or other souls in Purgatory, but they could pray for us. This is one area of Catholicism I wished we knew more about since so many of us will pass through it before we get to Heaven.

SwissMiss: I suppose we'll understand better what we can and cannot do, and for whom we can and cannot pray when we're in purgatory, eh? Unless we die absolutely pure, that's where we'll become pure by God's mercy...

If that were possible and it was me, I would have paired off with somebody so we could pray for each other and quicken our lenght of time.