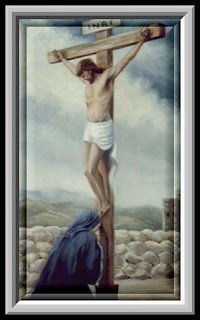 (Source: Devotion to the Sorrowful Mother by TAN Books, available for purchase here.)

Four Special Favors
The graces promised by Our Lord to those who venerate His Holy Mother's sorrows are very great. St. Alphonsus Liguouri states in the Glories of Mary that it was revealed to St. Elizabeth of Hungary that some years following the assumption of Mary,
St. John the Evangelist missed the mother Jesus had given to him upon the cross and was "seized with an ardent desire to see her again."

This grace was granted to St. John, and Lo - Mary appeared to him with Jesus. Mary then was heard to ask her Divine Son for special graces for those who meditated upon her sorrows. Our Lord promised these four favors:

St. Bridget of Sweden (1303-1373) was one of the greatest mystics of the Catholic church. She was blessed with several apparitions of Jesus and the Blessed Virgin Mary. Her revelations, including those listed below, are available for purchase here. The following graces are promised by Mary herself to those who daily honor her tears and sorrows by reciting seven Hail Mary's in honor of her tears and sorrows:

Let us dear reader, together endeavor always to honor our Dear Mother and compassionate her sorrows. How generous will be her Holy Son with us! May Mary's prayers go with you always!

Welcome Back. Hope you returned refreshed and joy-filled....(at least after you catch up with laundry etc.)

I never heard this St. Bridget promises of Mary for the seven Hail Marys. I have to print this out and put it into practice. Thanks.

i did come across this post before, but forgot about the graces given to those who meditate on Her Dolours.

I have St Alphonsus Liguori to thank for my devotion to Her Sorrows. His discourses are simply amazing and insightful. I recite the 7 Hail Marys daily and have encouraged people to say these simple (yet profound prayers) everyday...what a blessing for me, by the grace of God.

This is a great site: am sure you came across this before.
http://www.miraclerosarymission.org/sorrow3.html