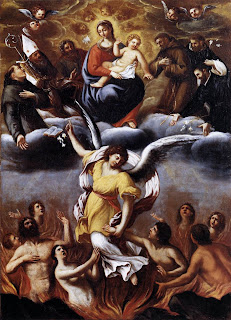 What are indulgences?
How do they assist the holy souls?
"The Supplement to the Summa Theologiae (Question 13, article 2) establishes that God allows one man to satisfy for another. Again, let us listen:"

"Satisfactory punishment has a twofold purpose, namely, 1) to pay the debt, and 2) to serve as a remedy for the avoidance of sin. Accordingly, as (2) a remedy against future sin, the satisfaction of one does not profit another, for the flesh of one man is not tamed by another's fast; nor does one man acquire the habit of well-doing, through the actions of another, except accidentally, in so far as a man, by his good actions, may merit an increase of grace for another, since grace is the most efficacious remedy for the avoidance of sin. But this is by way of merit rather than of satisfaction. on the other hand, as regards the payment of the debt, one man can satisfy for another, provided he be in a state of charity, so that his works may avail for satisfaction. Nor is it necessary that he who satisfies for another should undergo a greater punishment than the principal would have to undergo (as some maintain, who argue that a man profits more by his own punishment than by another's), because punishment derives its power of satisfaction chiefly from charity whereby man bears it. And since greater charity is evidenced by a man satisfying for another than for himself, less punishment is required of him who satisfies for another, than of the principal: wherefore we read in the Lives of the Fathers (v, 5) of one who for love of his brother did penance for a sin which his brother had not committed, and that on account of his charity his brother was released from a sin which he had committed. Nor is it necessary that the one for whom satisfaction is made should be unable to make satisfaction himself, for even if he were able, he would be released from his debt when the other satisfied in his stead. But this is necessary in so far as the satisfactory punishment is medicinal: so that a man is not to be allowed to do penance for another, unless there be evidence of some defect in the penitent, either bodily, so that he is unable to bear it, or spiritual, so that he is not ready to undergo it."

"And, later, in question 25, article 1, he argues that an indulgence can remit the punishment due for the satisfaction of sins:"

"All admit that indulgences have some value, for it would be blasphemy to say that the Church does anything in vain. But some say that they do not avail to free a man from the debt of punishment which he has deserved in Purgatory according to God's judgment, and that they merely serve to free him from the obligation imposed on him by the priest as a punishment for his sins, or from the canonical penalties he has incurred. But this opinion does not seem to be true. First, because it is expressly opposed to the privilege granted to Peter, to whom it was said (Matthew 16:19) that whatsoever he should loose on earth should be loosed also in heaven. Hence whatever remission is granted in the court of the Church holds good in the court of God. Moreover the Church by granting such indulgences would do more harm than good, since, by remitting the punishment she had enjoined on a man, she would deliver him to be punished more severely in Purgatory."

"Hence we must say on the contrary that indulgences hold good both in the Church's court and in the judgment of God, for the remission of the punishment which remains after contrition, absolution, and confession, whether this punishment be enjoined or not. The reason why they so avail is the oneness of the mystical body in which many have performed works of satisfaction exceeding the requirements of their debts; in which, too, many have patiently borne unjust tribulations whereby a multitude of punishments would have been paid, had they been incurred. So great is the quantity of such merits that it exceeds the entire debt of punishment due to those who are living at this moment: and this is especially due to the merits of Christ: for though He acts through the sacraments, yet His efficacy is nowise restricted to them, but infinitely surpasses their efficacy.Now one man can satisfy for another, as we have explained above (13, 2). And the saints in whom this super-abundance of satisfactions is found, did not perform their good works for this or that particular person, who needs the remission of his punishment (else he would have received this remission without any indulgence at all), but they performed them for the whole Church in general, even as the Apostle declares that he fills up "those things that are wanting of the sufferings of Christ . . . for His body, which is the Church" to whom he wrote (Colossians 1:24). These merits, then, are the common property of the whole Church. Now those things which are the common property of a number are distributed to the various individuals according to the judgment of him who rules them all. Hence, just as one man would obtain the remission of his punishment if another were to satisfy for him, so would he too if another's satisfactions be applied to him by one who has the power to do so."

Come back for more tomorrow!
Posted by Sanctus Belle at Friday, July 27, 2007

Purgatory is God's infinite mercy at work, but also a very scary place. That is why I appreciate and take advantage of Divine Mercy Sunday. What an incredible act of mercy!