Save Us From the Fires of Hell VIII

I originally posted this last year, I am very reluctant to write about myself, but in reading this again, I pray you may find this helpful. May Mary's prayers go with you always. 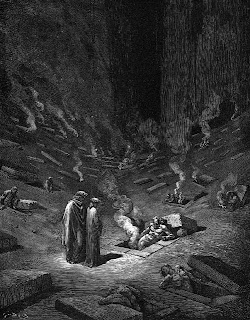 Sanctus Belle: I was fed the God Loves Me, Jesus Love Me stuff for decades. It's true. However, you can't use that as an excuse to deny the existence of Hell. The people who taught me never acknowledged Hell. Hell was so passe.

Hell is serious and it's real.

This is some serious reading. Thank you for giving me much to ponder and pray over.

But, even so, do try to remember the other side of the equation, even if the warm-fuzzy-liberals have dampened your enthusiasm, it is possible to hold both sides of Catholic teaching in tension, without abandoning either.

Fear of Hell is as good a way to opening your heart to receiving the Grace of God, as anything else, and so when we kill our ability (as a whole society) to be motivated by fear, we are giving ourselves a form of spiritual leprosy, and we are becoming a senseless culture, incapable of feeling the fear and pain that could cause us to cry out for mercy, to ask God to save us from ourselves.

The nature of these posts on hell is to meditate on the truths of the nature and the existence of hell. The purpose of the posts on hell is not to diminish God's mercy. God will never spurn a contrite soul, His ability to forgive is infinite. But the fear of God's justice and the trust in God's mercy I believe are to be held in balance. It is prudent to not over emphasize, certainly not to ignore one or the other. Amen+

Sanctus ~ I had meant to comment on this before, but I just couldn't.

You really should read "Salvici Doloris" I was going to provide the link but it's not on my fav's! In any case, you can find it through EWTN or the Vatican website, it's only 36 pages printed off, and that includes the footnotes.

You may also want to read Dives en Miseriacordia.

God bless you! I know that feeling, the same one that drove me to confession...but it took me a lot longer. I am a petulant child and I spend a lot of time thrashing and kicking and screaming before I obey.

I praise God for His patience.

About 3 years ago I dropped into a black hole – four months of absolute terror. I wanted to end my life, but somehow [Holy Spirit], I reached out to a friend who took me to hospital. I had three visits [hospital] in four months – I actually thought I was in hell. I imagine I was going through some sort of metamorphosis [mental, physical & spiritual]. I had been seeing a therapist [1994] on a regular basis, up until this point in time. I actually thought I would be locked away – but the hospital staff was very supportive [I had no control over my process]. I was released from hospital 16th September 1994, but my fear, pain & shame had only subsided a little. I remember this particular morning waking up [home] & my process would start up again [fear, pain, & shame]. No one could help me, not even my therapist [I was terrified]. I asked Jesus Christ to have mercy on me & forgive me my sins. Slowly, all my fear has dissipated & I believe Jesus delivered me from my “psychological prison.” I am a practicing Catholic & the Holy Spirit is my friend & strength; every day since then has been a joy & blessing. I deserve to go to hell for the life I have led, but Jesus through His sacrifice on the cross, delivered me from my inequities. John 3: 8, John 15: 26, are verses I can relate to, organically. He’s a real person who is with me all the time. I have so much joy & peace in my life, today, after a childhood spent in orphanages [England & Australia]. Fear, pain, & shame, are no longer my constant companions. I just wanted to share my experience with you [Luke 8: 16 – 17].
Peace Be With You
Patrick