Save Us From the Fires of Hell VII 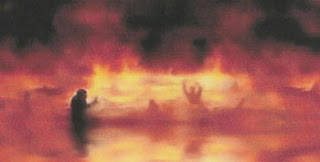 On the Company of Hell
(Source: The Last Four Things by Fr. Martin von Cochem. TAN Books)
We know the fate of those who are unfortunate enough to die in a state of mortal sin is hellfire. What of the torments that accompany the fire? The saints can tell us much of the plethora of sufferings that await the damned.

St. Thomas Aquinas tells us that the sins of each one will be fully known to all other inhabitants of hell. Our sins will be fully visible in our bodies - we can imagine how horrible this would be. Can you think of what things would be more painful in this life than to live in open shame? That all around you, everyone knew of all your "hidden" sins and shameful acts?

The evil one will brand each reprobate with a mark of shame on each portion of thier body with which they sinned. This is in order that all shameful deeds may be known to all. This is the everlasting disgrace which God foretells of through His prophet: "I will bring an everlasting reproach upon you, and a perpetual shame which shall never be forgotten." (Jer. xxiii 40) No effort will erase the mark, nothing may be used with which to cover it. According to St. Ephrem: "This shame and infamy will be more insupportable than the hell-fire itself, because it will keep constantly before thier remembrance the sins whereby they defiled themselves on earth."

Dionysius the Carthusian writes about a mystical transportation which occured to his fellow religious. The monks pressed thier fellow for a detailed account of what he'd seen. This was dutifully recorded and ought to serve us well as a reminder of our need to avoid mortal sin: "I was conducted by my guide a long way until we came to a region of gloom and horror, where were a countless multitude of men and women, all suffering terrible torments. These were the persons who had sinned with thier bodies; they were plagued by huge fiery monsters, who sprang upon them, and, despite thier resistance, clasped them and hugged them with thier paws until they shrieked with pain. Amongst those who were tormented in this manner I saw a man whom I knew very well, and who had been much esteemed and respected in the world. Seeing me he cried aloud in piteous tones "Alas, alas! Woe is me that I sinned as I did in my lifetime, for now the pain I endure grows greater every day! But the worse of all , what I feel most acutely, is the shame and disgrace to which my sins expose me, for all know them, and all despise me and mock me on account of them."

Just as hell is only one mortal sin away, so is grace only one confession away. Do not delay one more day. If you are embarassed to confess some secret sin - confess it anyway! Do it and be healed by Jesus - ask for the grace and strength to not commit it again. Any brief moment of embarassment in confessing such a thing behind a screen is nothing compared with multitudes knowing every shame you've committed and mocking you for all eternity without respite! Go to a priest and be healed and delivered from such a fate!

Prayer of Reparation
O sweet Jesus, whose overflowing charity for men is requited by so much forgetfulness, negligence and contempt, behold us prostrate before Thy altar eager to repair by a special act of homage the cruel indifference and injuries, to which Thy loving Heart is everywhere subject.
Amen+
Posted by Sanctus Belle at Thursday, October 02, 2008

This is a good time of year to remind everyone about Sin and the great importance of Sacramental Confession.

I pray more Catholics will overcome their fear and seek out Confession. Actually, even non-Catholics can go to Confession; a fact that I did not know until recently.

I was without it for so long in my ignorance. I would die (in more ways then one) without it now.

You are in my prayers.

Yours in Christ,
Innocent