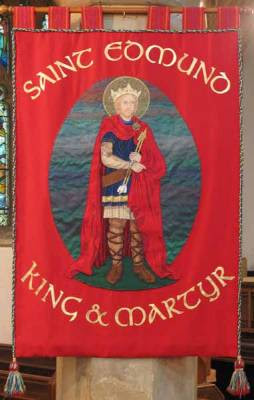 Now this portion of the life of St. Edmund is considered a legend and is in fact not even mentioned in the Catholic Encyclopedia. This is a nice story, which may or may not be true. All things are possible for the Lord who commands everything in His creation! These are the things among which will not be revealed until the end of times when all things will be made known. It is a nice story and I can imagine in medieval times it being elaborated upon with each generation's telling, but how many were indeed edified by it?
Abbo of Fleury's life of St. Edmund continues the narration of Edmund's martyrdom by decapitation as follows:
"His severed head was thrown into the wood. Day and night as Edmund's followers went seeking, calling out "Where are you, friend?" the head would answer, "Here, here, here," until at last, "a great wonder", they found Edmund's head in the possession of a grey wolf, clasped between its paws. "They were astonished at the wolf's guardianship". The wolf, sent by God to protect the head from the animals of the forest, was starving but did not eat the head for all the days it was lost. After recovering the head the villagers marched back to the kingdom, praising God and the wolf that served him. The wolf walked beside them as if tame all the way to the town, after which it turned around and vanished into the forest."

After giving the head and body a speedy burial, the kingdom rebuilt itself for several years before finally erecting a church worthy of Edmund's burial. Legend told that upon exhumation of the body, a miracle was discovered. All the arrow wounds upon Edmund's corpse were healed and his head reattached to his body. The only evidence of his previous decapitation was a thin, red line around his neck. Despite being buried for many years in a flimsy coffin, his skin was soft and fresh as if he were merely sleeping the entire time.
In Percy Dearmer's The Little Lives of the Saints, we are told of Edmund's posthumous revenge on the Danes:
“...the last heathen Danish king, Sweyen (the father of Canute), tried to destroy (Bury St Edmunds). He laid siege to it, and demanded all the treasure of the church, else he threatened to destroy the church and kill all the clergy; and this he said with many taunting words about the saint who lay buried there. But as he was sitting on his war–horse, waiting to attack the town, he saw in the sky St Edmund coming towards him, a crown on his head and a long bright lance in his hand. 'Help, friends!' he cried. 'Edmund is coming to kill me!' Then he fell down, and died in convulsions.”
Sweyn's son, King Canute, converted to Christianity and rebuilt the abbey at Bury St Edmunds. In 1020, he made a pilgrimage there and offered his own crown upon the shrine as atonement for the sins of his forefathers.
Posted by Sanctus Belle at Tuesday, October 07, 2008