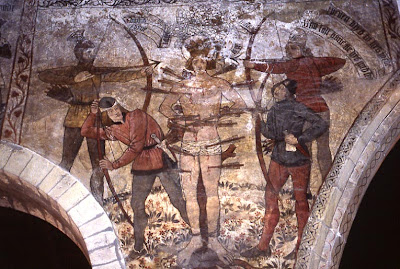 Martyrdom of St. Edmund, Pickering, N.Yorkshire
"This very fine (and, like all those at Pickering, very large) painting was made, like all those in the church, sometime between 1461 and 1483, and in its less exalted way it is, I think, as much on the cusp between ‘Medieval’ and ‘Renaissance’ as, say, Gentile da Fabriano’s Adoration of the Magi altarpiece of 1423. Edmund, crowned and already with a halo, is bound to a tree with a bubble-like cloud of flourishing leaves showing above his head. He is pierced with many murderous-looking arrows fired by the four archers who surround him. Their garments, including the deeply fashionable very short tunic, are more appropriate for swaggering young men of the town than military archers, whether English, Danish or for that matter Roman, since the influence here from paintings of the Martyrdom of St. Sebastian is surely undeniable. The two archers in the foreground in particular look thoroughly Italianate in their elegantly articulated and posed bodies - the one on the left apparently restringing his bow, the one on the right looking thoughtfully at Edmund."
"Entirely medieval in spirit though are the inscriptions at the top of the scene. Around Edmund’s head, angelic hands (the one at the left clearer) hold a continuous scroll. Only the word ‘Edmund’ to the left of the tree’s foliage is readable, but the rest of the sentence probably identified him fully as martyred King of the East Angles. The second scroll on the right, curving around the head, shoulders and elbow of the upper right-hand archer, reads ‘Heven blyß to his mede, hym s[h]all have for hys gud de[de]...’. "
(source)
Posted by Sanctus Belle at Thursday, October 09, 2008