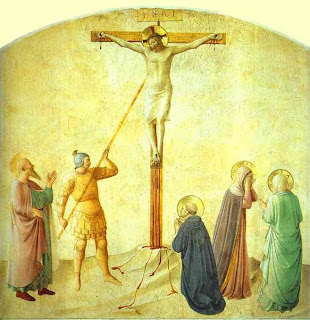 The Piercing Of the Side of Jesus
(Source: Revelations of St. Bridget by TAN Books, available for purchase here)
Directly following Our Lord's death, in the midst of incomparable sorrow, our Sorrowful Mother witnessed her Son run through by a Roman soldier. She relates the following to the mystic St. Bridget of Sweden:
The Blessed Virgin Mary speaks: "Someone said to me 'He is dead, but He will rise again.' Another said 'O lady, now the penalty of thy Son is paid to eternal glory.' While all were thus speaking, one came up and drove his lance so stoutly into His side that it almost came out on the other; and when he drew out the lance, its point was all ruddy with blood. Then it seemed to me as if my heart was pierced, when I beheld the heart of my beloved Son pierced through...this wound penetrated my heart, and it is [a wonder] that it did not burst. Others departed, but I could not."
Separately, St. Bridget relates this scene from her perspective as she was given to witness it through a vision by Divine Grace. Immediately following the death of Our Lord, briefly:
St. Bridget Speaks: "...He gave up the Ghost. Then His Mother, seeing this, trembled all over and would have fallen to the ground in her bitter anguish, had she not been supported by the other women...finally, all the Jews standing around, mockingly cried against His Mother, saying many things; for some said: "Mary, thy Son is dead." Others spoke other jeering words, and thus, while the crowd stood around, one running up with great fury plunged a lance into His right side so powerfully that the lance seems about to come forth in the opposite side of the body, and when it was drawn out, a very river of blood gushed impetuously from that wound; but the lance-head and part of the handle came forth blood-stained. His Mother, seeing this, trembled so violently and with bitter groans that her countenance and manner showed that her soul was then pierced with a keen sword of grief."
On account of who was Our Lord nailed to the cross? Who did thrust the lance? Who caused such misery in the sinless and immaculate soul of the Mother of God? Think - who is guilty of this unspeakable crime?
You and I are the guilty ones!
We pound the nails, we cast the lance. Our sins wrought this suffering. We must pray and strive for purity in all we do. Pray for the grace of holiness. Console the sorrowful heart of Your Mother and she will work out the details of your conversion and salvation.
Prayer of St. Bridget
O Jesus, sweetness of hearts and great sweetness of minds,
by the bitterness of the vinegar and gall which Thou
didst taste for us, grant me at the hour of my death
worthily to receive Thy Body and Blood,
for the remedy and consolation of my soul.
Amen+
Posted by Sanctus Belle at Tuesday, January 30, 2007