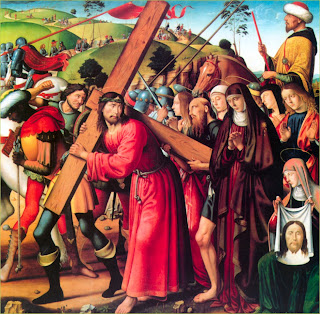 Mary Walks the Way of the Cross With Her Son
(Source: Revelations of St. Bridget by TAN Books available here.)
Picking up where we left off in the last post, Mary revealed to St. Bridget of Sweden in a vision how she witnessed the scourging at the pillar then accompanied Him during his Passion, making the first Way of the Cross. Take a moment now and walk beside your Mother as she follows Jesus' bloody footprints and imagine her heart pierced anew watching her Son undergo His Passion.
The Blessed Virgin Mary Speaks: "Now, as my Son was led away like a robber, He wiped away the blood from His eyes. And when He was condemned, they gave Him His cross to bear. When He had carried it a short way, one came up and assumed it. Meanwhile, as my Son was going to the place of His Passion, some smote Him on the back, others struck Him in the face. And so violently and rudely was He struck that though I did not see the person striking, I distinctly heard the sound of the blow. And when I came with Him to the place of the Passion, I there beheld all the instruments prepared for His death. And my Son Himself, coming thither, divested Himself of His clothes, the attendants saying to each other: 'These vestments are ours, nor can He have them again, that is condemned to death.' Now, while my Son stood as naked as when He was born, one, running up, handed Him a cloth with which, exulting inwardly, he covered Him. Then His cruel executioners seized Him, and stretched Him on the cross."
Ask yourself - just why did Jesus, with Mary beside Him undergo such a suffering? Jesus as the Lamb of God offered up himself as a sacrifice for the forgiveness of the sins of the world, from the first sin of Adam unto the last sin committed prior to His return. Mary, for her part, suffered immensely in her heart and soul - her Son was crucified in body, Mary was crucified in soul - for our sins. They underwent this terrible trial for you and me. Let us think and remember this often and try very hard to appreciate thier sacrifice made on our behalf, and be most grateful.
Prayer
Beloved Mother, stricken with grief, teach us to accept all our sufferings, so that we may relieve your sorrowful heart and that of Jesus. In doing so, may we give glory to God who gave you and Jesus to us. As you suffered, teach us to suffer silently and patiently. Grant unto us the grace of loving God in everything. O Mother of Sorrows, O Mother most afflicted of all mothers, have mercy on the sinners of the whole world.
Amen+
Posted by Sanctus Belle at Saturday, January 27, 2007

What a beautiful blog!