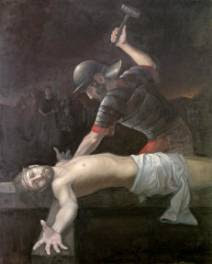 Mary's Way of the Cross Continues
According to St. Bridget of Sweden
(Source: Revelations of St. Bridget by TAN Books
available for purchase here.)
We continue now to witness with Mary her Divine Son's Passion through the visions of St. Bridget. Our Saviour has been condemned then scourged, beaten & humiliated - all within view of His Mother. Mary continues relating to the mystic how she and her Son experienced Good Friday.
The Blessed Virgin Mary speaks: ...His cruel executioners seized Him, and stretched Him on the cross. First they fixed His right hand to the beam, which was pierced for nails, and they transfixed His hand in the part where the bone was firmest. Then drawing His other hand with a rope, they affixed it in like manner to the cross. Then they crucified His right foot, and over it the left, with two nails, so that all the nerves and veins were extended and broken. This done, they fitted a crown of thorns to His head, which so acutely wounded the venerable head of my Son that His eyes were filled, His ears stopped up, with the blood that streamed down, and His whole beard matted with the gore. And as He stood thus pierced and bloody, condoling with me as I stood mourning, He looked with blood stained eyes to John, my kinsman, and commended me to him. At that time I heard some saying that my Son was a robber, others that He was a liar, others that none better deserved death than my Son, and these words renewed my grief. But, as has been said, when the first nail was driven into Him, horrified at the first blow, I fell as though dead, my eyes darkened, my hands trembling, my feet quivering, nor for bitterness could I look again before He was nailed fast. On rising I beheld my Son hanging miserably, and I His most wretched mother, filled with terror on all sides, could scarcely stand for grief. But my Son, seeing me and His friends weeping disconsolately, in a loud and tearful voice cried out to His Father, saying: 'Father, why hast thou forsaken Me?'"
Take some today to listen to your Mother's voice as she calls you to join her at the foot of her Son's cross. Go there with all your woes, cares, worries and sorrows. Offer them to the Heavenly Father, in union with Jesus' suffering on the cross - for to do this is to pattern your offering upon Mary's. That is what she did at the foot of her Son's cross, offered her pain, in union with Jesus' to the Father for the salvation of the whole world. Pray for the conversion of poor sinners, for the Church, for the Holy Souls in Purgatory. Ask Mary to offer your tears with hers and in return you can expect endless gifts of mercy!
Prayer
O Mary, Mother of Sorrows, I beseech Thee, by the bitter agony thou didst endure at the foot of the Cross offer to the Eternal Father, in my name, thy Beloved Son, Jesus, all covered with Blood and Wounds, in satisfaction for my sins, for the needs of Holy Church, the conversion of sinners, the relief of the Souls in Purgatory and for the special grace I now implore.
(Here mention your request.)
Amen+
Posted by Sanctus Belle at Sunday, January 28, 2007