November if the Month of the Holy Souls 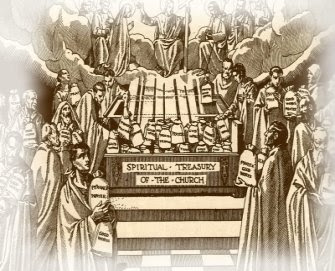 Who Are the Poor Souls?
The Poor Souls are the souls of those people who died in the friendship of God. But they still have some suffering to undergo for the sins they had committed during their lives on earth. It is the infallible teaching of the Catholic Church that there is a purgatory. As the word itself indicates, purgatory is the state of those who still have to be cleansed of the penalty which they owe for their past offenses against God.
The Poor Souls are poor because they are in suffering and need our help. We know from Sacred Scripture that there is a purgatory, as described in the second book of Maccabees, which unfortunately has been removed from the Protestant Old Testament. As described in Sacred Scripture, Judas Maccabeus, the leader of a Jewish army, decided to offer a sacrifice for the Jews who had died in battle. The Bible then tells us,"If he had not expected the fallen to rise again, it would have been superstitious and foolish to pray for the dead." However, since he believed in the resurrection of the dead, "he had this atonement sacrifice offered for the dead, so that they might be released from their sins" (II Maccabees 12:41?45).

The existence of purgatory is a defined truth of the Catholic faith. Those who die without the guilt of mortal sin, but with temporal punishment still due for their past offenses "are cleansed after death in purgatorial or cleansing punishments."

It is commonly believed that the principal suffering in purgatory is the pain of loss. The souls are temporarily deprived of the Beatific Vision.
(source)
Posted by Sanctus Belle at Monday, November 03, 2008