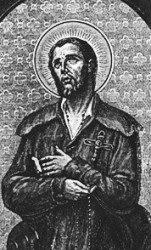 After the heroic death of his uncle during an epidemic in September 1766, Benedict, who had dedicated himself during the scourge to the service of the sick and dying, returned to Amettes in November of the same year. His absorbing thought at this time was still to become a religious at La Trappe, and his parents fearing that further opposition would be resistance to the will of God fell in with his proposal to enter the cloister. It was suggested, how ever, by his maternal uncle, the Abbé Vincent, that application be made to the Carthusians at Val-Sainte-Aldegonde rather than to La Trappe. Benedict's petition at Val-Sainte-Aldegonde was unsuccessful but he was directed to another monastery of the same order at Neuville. There he was told that as he was not yet twenty there was no hurry, and that he must first learn plain-chant and logic. During the next two years he applied twice unsuccessfully to be received at La Trappe and was for six weeks as a postulant with the Carthusians at Neuville, he finally sought and obtained admission to the Cistercian Abbey of Sept-Fonts in November, 1769. After a short stay at Sept-Fonts during which his exactness in religious observance and humility endeared him to the whole community, his health gave way, and it was decided that his vocation lay elsewhere. In accordance with a resolve formed during his convalescence he then set out for Rome. From Chieri in Piedmont he wrote to his parents a letter which proved to be the last they would ever receive from him. In it he informed them of his design to enter some one of the many monasteries in Italy noted for their special rigor of life. A short time, however, after the letter was dispatched he seems to have had an internal illumination which set at rest forever any doubts he might have as to what his method of living was to be. He then understood "that it was God's will that like St. Alexis he should abandon his country, his parents, and whatever is flattering in the world to lead a new sort of life, a life most painful, most penitential, not in a wilderness nor in a cloister, but in the midst of the world, devoutly visiting as a pilgrim the famous places of Christian devotion". He repeatedly submitted this extraordinary inspiration to the judgment of experienced confessors and was told he might safely conform to it. Through the years that followed he never wavered in the conviction that this was the path appointed for him by God.
(Source) The Catholic Encyclopedia, Volume II. Published 1907. New York: Robert Appleton Company. Nihil Obstat, 1907. Remy Lafort, S.T.D., Censor. Imprimatur. +John M. Farley, Archbishop of New York.
More in next post! BTW, I don't post it all in one LONG post because I, myself do not read LONG posts on blogs so I figure many others do the same. My preference is smaller bites of information to be taken in over longer periods of time. Hope you don't mind this method. May Mary's prayers go with you always. Amen+
Posted by Sanctus Belle at Tuesday, January 08, 2008