Our Lady of La Salette VIII 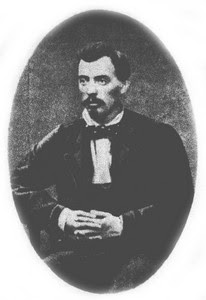 Melanie and Maximin met on the mountainside for the first time the day prior to the apparition of the Blessed Virgin Mary. Melanie, accustomed to solitute would have preferred to remain alone, nonetheless she agreed to meet with the lonely Maximin the next day - he was quite anxious to have company and craved companionship.

The day of apparition, Saturday , September 19, 1846, began as all others. They were tending thier heards of cows until Maximin peered into the ravine to see Our Lady seated upon a rock, her head in her hand, weeping. He would later recount to pilgrims "From there, she (Our Lady) rose into the air, disappeared, and left me with all my faults." He stated at another time, "The apparition and I are two different things. I was only an instrument. We have only been conduits , only parrots who have repeated what we have heard. We were stupid before the apparition, and we remain stupid after, and we will be stupid all of our lives."

When the message of the apparition of Our Lady of La Salette became widely known, the children were placed in Providence, a convent school for four years. There they were protected, educated, catechised and were given First Communion. Melanie's family was also granted a small stipend so they would not suffer for loss of her income, nor would her siblings have to beg. The children were only give First Communion after thier parents made thier Easter Duty.

They both went on to have troubled and unsettled lives. This is in seeming contrast to the lives of some other well-known apparitions such as Lourdes and Fatima. However, these two also lacked the devout and relatively stable homes of the more fortunate seers. We could draw from this that a stable, prayerful and pious family is certainly the foundation of a stable, prayerful and pious adult life. We see this in our society today - dysfunctional homes produce dysfunctional children who grow into dysfunctional adults. This seems to have been the case with the La Salette seers. However, this does not negate the message, nor did this apparent "dysfunction" prevent them from carrying out the mission given them by Our Lady, namely, "You will make this know to all my people." This they did indeed carry out.

Maximin wanted to become a priest, and entered several seminaries. He was ejected from each one as he had no interest in study. The Superior of the convent school Providence described him thus: "Maximin has ordinary abilities; he is sufficiently obedient, but light, fond of play, and always in motion." He suffered from a short attention span but generally had a pleasant disposition. He tried and failed at other venues such as: mechanic, doctor, pharmacist and artist. Nothing could be gained by him it seemed in his studies. While in Paris, he became so destitute he went hungry and handled his finances poorly. He became a Papal Zouave, a voluntary soldier of the Holy Father but this also lasted a short time. He then entered into French military service for a time. Without sufficient insight or prudence, he lent his name to a liquor distributor who swindled him of his remaining money. Poor and a "worldly" failure, Maxmin returned to Corps for the remainder of his life. When questioned near to the time of his death "Hasn't the apparition produced something special within you? I mean, hasn't it brought you a particular grace to improve you, to inspire you to live in a saintly way?" Maximin responded, "I can't say that. I never felt anything special. But the Blessed Virgin did grant me the grace of a very Christian education with the good sisters at Corps. She surrounded me with very edifying priests. My childhood and youth were spent in a milieu that encouraged me to do good and to avoid evil. Without the apparition I could have strayed far from God and become really bad. I might even have become a member of the Internationale, or the Commune. By keeping me in this milieu and giving me the religious convictions I still have, she betowed a wonderful gift on me." Indeed it would seem he retained the innocence of boyhood to the end, when he died of tubuculosis at the age of 40.
Posted by Sanctus Belle at Wednesday, March 28, 2007

So interesting. One wonders why these seers had the life they had compared to other visionaries. I suppose we could say God uses all his children one way or another.

Sanctus Belle: Interesting correlation between the home life and the lives of the seers as they matured. It makes perfect sense to me. But, so many these days would disagree. Sad, very sad.