Our Lady of La Salette VII 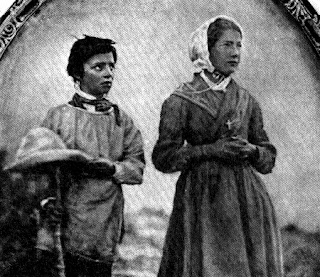 The Seers of La Salette - Who are they?
Francoise Melanie and Peter Maximin were born in Corps, France, a tiny hamlet with a population of less than 1000 in the Southern French Alps. The two children did not meet until the day prior to the appearance of the Virgin Mary.
Melanie was born November 7, 1831 and was 14 at the time of the apparition. She was born into a family that was not devout and quite poor. Put to work as a young child to assist the family financially, she was hired out by her parents as a shepherdess for area farmers. This life of hard work and long hours left her with little to no time to attend Mass, even on holy days. Her primary contact with the Church was in hearing the bells ring prior to Mass while at work in the valley. When Our Lady asked her "Do you say your prayers well my children?" Melanie answered in all honesty, "No Madame, hardly at all." Later in her life, she would relate "Isn't justice served that I, the least of all creatures, who did not begin to pray until the age of 15, suffer more and am more humiliated than others?"
Melanie led a lonely and rather sad life for such a young girl. She was described by those who knew her, and especially by those for whom she worked as timid, shy, sulky and introverted. She was totally uneducated and illiterate. Her time was spent day after day, week after week on the mountainside tending flocks, in freezing rain, blistering heat, wind and snow. One employer testified the following "She was excessively timid, and so careless of herself, that on returning from the mountain, drenched with rain, she never thought of changing her clothes. Sometimes, and it was part of her character, she would sleep in the cattle sheds; and at others, if not observed, she would have passed the night under the stars." Her employer at the time of apparition, Baptiste Pra, also described the young seer thus, "...idle, disobedient, inclined to pout, and moody." He also said that following the appearance of the Blessed Virgin, Melanie changed, she was more active, obedient and prayerful. It would appear that the young seer started to fight against her own moodiness, and with some success.
Maximin was four years Melanie's junior and was born August 27, 1835, also to a poor and irreligious family. Maximin's father was a cartwright, who had a well deserved reputation as a man who lacked reliability. In Corps he was viewed as a "spendthrift and a drifter." Maximin's mother died when he young very young and his stepmother was said to dislike him intensely. He was high-spirited, energetic and behaved in a poorly disciplined manner, although he received regular beatings from his parents. Despite this outwardly looking bleakness - the young seer tended toward a cheerful disposition and was well liked by his fellow children. He generally performed poorly in his studies, which often took place with his father in the local tavern. He could neither read nor write but had learned the Ave and the Our Father just prior to the apparition of Our Lady.
Neither of the little visionaries recieved any guidance or spiritual direction. They likewise had no examples of piety by which to form themselves, no training or education in natural or supernatural virtues, little to no catechesis and attended the Sacraments rarely. At the time of the Blessed Virgin's appearance, Melanie was tending Baptiste Pra's cows, and Maximin had the day prior been hired as a replacement worker by Peter Selme to herd his cows.
It should be obvious to all that these two children were indeed among the poorest and most wretched of the inhabitants of this small community in the French Alps. Only God, who knows and tests the hearts of each one of us, knows why Melanie and Maximin were chosen to hear and make known to all His message related through His Holy Mother. More will be posted on the lives and experiences of the two young seers in subsequent posts.
(Source: "You will make this known to all my people" by the Franciscan Friars of the Immaculate, 1998. This books bears the Imprimatur of Rev. Bishop Sean O'Malley.)
May Mary's prayers go with you always.
Posted by Sanctus Belle at Tuesday, March 27, 2007