Our Lady of Hope - Part II 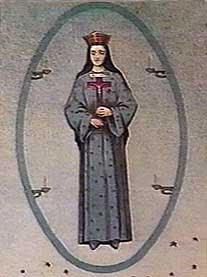 January 1871 was one of the darkest times in the history of France. The Empire had fallen before the advance of the Prussian armies, Paris was under siege, and the enemy forces were driving West. On January 17, the Prussian armies were at the outskirts of Laval. That afternoon the Bishop of Saint-Brieuc signed a solemn vow to Our Lady of Hope, which was read, in the cathedral at six o'clock. Mary chose this particular time to show, in a most extraordinary way, that the prayers of the French people would be answered.
It happened on January 17th, 1871. The German army neared the west of France. The mass of its deserters was endless. They would not heed the commands of their officers, and even though two were executed, it did not stop others from running away.

The snowy weather made for miserable discomfort. All day and night wagons passed through Laval from east to west. All bearing wounded whom needed care.

The countryside farmers feared the onslaught of needy and hid their possessions of money, food, wine and linens. Typhoid had broken out and Small pox threatened all. Everything seemed doomed.

Just days before, the Aurora Borealis produced fear and awe in many. Some reported the evening lights as tall masts of ships and others claimed them to look like the steeples of a great cathedral.

The worst fear came with an earthquake at about half past twelve the day of January 17th. No one saved hope for anything. Despondency surmounted unbeatable. Shouts of "No use in praying. God doesn't hear us!" prevailed from even the most optimistic

In a barn, a family of two young boys and their father crushed thorns to feed the horses. Eugene Barbedettes, twelve and his brother, Joseph, aged ten, were fascinated with the Northern lights and were anxious to see the show that night.
It was in a little village of Pontmain, near the northern end of the diocese of Laval, that the miraculous event occurred. From six to nine that evening the Blessed Virgin appeared continuously in the sky over one of the houses in the village.
The apparition was witnessed by four small children, Eugene and Joseph Barbadette, Francoise Richer, and Jeanne-Marie LeBosse. Joseph, who later became an Oblate of Mary Immaculate, described the Lady as about twenty years of age and very beautiful.

She was dressed in a star-studded robe of dark blue with slippers of the same colour. A black veil on which she wore a gold crown decorated with a red band covered her head. It was in a little village of Pontmain, near the northern end of the diocese of Laval, that the miraculous event occurred. From six to nine that evening the Blessed Virgin appeared continuously in the sky over one of the houses in the village.
Posted by Sanctus Belle at Friday, November 30, 2007

Labels: Our Lady of Hope, Pontmain