Meditation for the Month of Holy Souls IV 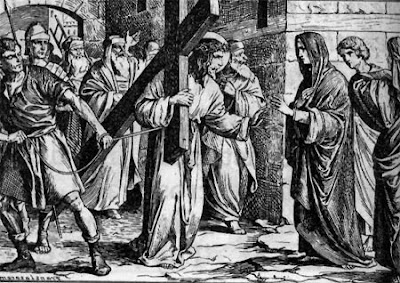 "So they took Jesus, and he went out, bearing his own cross. And as they led him away, they seized one Simon of Cyrene, who was coming in from the country, and laid on him the cross, to carry it behind Jesus And there followed him a great multitude of the people, and of women who bewailed and lamented him. But Jesus turning to them said, "Daughters of Jerusalem, do not weep for me, but weep for yourselves and for your children. For behold, the days are coming when they will say, 'Blessed are the barren, and the wombs that never bore, and the breasts that never gave suck!' For if they do this when the wood is green, what will happen when it is dry?" And they brought him to the place called Golgotha (which means the place of a skull). John 19:1, Luke 23:26-32.

I remember reading some of the writings of St. Thersa of Avila. Her spiritual director had suggested a certain spiritual practice that I've attempted to use and will illustrate here. I'm in no way stating I'm good at it mind you, but I do find this technique helpful in calming the mind which makes it easier to focus and concentrate on the topic of meditation, which is now Mary meeting her Son as He carries His cross. The idea is to focus on one thing, one image, letting go of the rest. Specifically, St. Teresa was given the idea of the hands of Jesus. She was instructed to approach Jesus through His humanity and to meditate upon His hands as he went through the various stages of His life.

We can use the same technique to focus and clear out the debris of our meditation on any topic. Think of Jesus' little baby hands, tucked in lovingly by His mother as she places Him in the manger. Imagine his 12 year hold hands as he talked with the scribes in the Temple, etc.

Now applied to this current meditation: See the hands of Jesus as they grasp His cross. His were strong, masculine hands, muscular from years of working with St. Joseph. Now see them swollen, covered with dried blood, perhaps even slipping from this heavy weight from time to time in this hard labor. His hands are not yet pierced, but carry on them the wounds of abuse. He most likely fell upon them along the road to Calvary. See them reach out to His mother as she stands by the roadside, quietly dying inside to see her Son this way. Did He have a moment to meet her outstretched hand? "Son, I would carry this cross for you if I could. You are not alone, I am with You..." Did He touch her face one last time? Oh, now they have not the strength to continue, blood loss, thirst and fatigue threaten this life and Simon must now take up the cross. See His holy hands now falling limp at His side, blood dripping from His fingertips as He walks like the lamb to its slaughter behind the cross they could not longer bear. "No, do not weep for Me, but weep for my mother, assist her in her sorrow for love of Me...for I love her more than myself." O look, we are almost there....they have the nails and the hammer ready!

I'll have to use this myself. I have a problem concentrating on the cross when I say the Divine Mercy chaplet...this should help!