The Burial of Jesus II 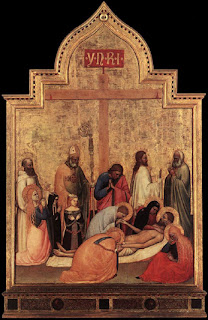 "You are changed to be cruel toward me"
(Job 30:21)
In grief and sorrow did Mary sit on Calvary, her dead Son in her arms, pressing Him to her heart. The disciples, fearing Mary may perish for sorrow, approached her reluctantly to remove from her our Lord's body to bury Him. With holy fear did they lift Him from her grasp, annoint Him with aromatic herbs and enfold Him in the shroud. This cloth of course is well known as the Shroud of Turin whereupon His sacred image can still be seen.
This mournful procession walks toward the tomb. The disciples carry Jesus on their shoulders. Imagine the multitude of angels which walked beside them, walking among them our Blessed Mother, following her Son to His final resting place. "O, how willingly would Mary have buried herself alive with her Son had this been His will!" This she revealed to St. Bridget of Sweden. But...alas this was not His holy will. She was to live on and be the mother of St. John, and the mother of us all. The body of Jesus was placed in the tomb, annointed with the tears of Mary. Alongside His body were placed the nails of the crucifixion and the crown of thorns.
According to St. Alphonsus de Ligouri: "When it was time to raise the stone to close the entrace, the grief-stricken disciples approached our Blessed Lady and said to her, "It is time now, O Lady, to close the tomb. Forgive us; look at your Son once more, and say goodbye to Him for the last time." Her reply, the author imagines was thus: "O my beloved Son, am I not going to see you any more? Receive, then, my last farewell, as I gaze upon You for the last time, the last farewell of your devoted mother. Receive my heart, which I bury with you." So we can say with confidence, buried in the tomb of Christ, was His holy body, and beside it the soul of Mary.
Prayer
May I spend the remainder of my days, sweet mother, in grieving over your sufferings an dthe sufferings of my Redeemer. These sorrows, I hope, will give me the confidence and strength I will require at the hour of my death, so that I will not despair at the thought of the many sins by which I have offended my Jesus. You must obtain pardon, perserverance, and heaven for me. In heaven I hope to be happy with you; may it be so. Amen. Amen+
Posted by Sanctus Belle at Thursday, May 31, 2007

That was a beautiful reflection on Our Lord's burial and Mary's suffering. Thanks!