What we have lost III - the Catafalque and my inherent sarcasm 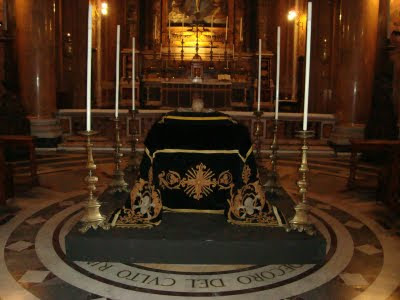 Yes its been months since I've posted. Yes, the feast of Our Lady's Sorrows and most of Lent has gone by and I've not posted, not once. Yes well...I'm busy and stressed and not feeling very virtuous, or talkative, or social or....well you get the picture. Quite frankly I don't feel I have a single thing to say of any value whatsoever. Shortly this will become glaringly obvious...

And no I'm not having a "dark night" I find it irritating when folks jump to the "oh, you're having a dark night" experience. Are you kidding me? The dark night of the soul of which SAINT John of the Cross speaks about is for SAINTS, people very advanced in the spiritual life. That is not me. Not even close. This is not what people like me go through. No...I'm afraid this is quite mundane, more like the Dark Knight maybe but not THE dark night.

Nope, I'm in the desert eating the liturgical sand along with everyone else. Nope, no oasis IN SIGHT

Anyway...one of the many things of which I mourn the loss of in the Happy Clappy MODERNE Catholic church in which I exist is any sort of clear thinking about death. Yes death. That's what I said. We ought to think alot about death. It is the most important moment of our lives. The state in which we die in determines WHERE we spend ALL ETERNITY. We have a serious disrespect and disconnect from death.

I do not dwell on death but I do not feel disconnected to it. Perhaps this is the result of having experienced the death of my sister in a car accident when we were children. I grew up with death, under the spectre of death. Death came to live in our house. No, I'm not feeling sorry for myself. I believe very strongly that my sister is in Heaven because she died young, this was what God caused or allowed and so I long ago accepted this. She died shortly after her first Holy Communion and was buried in her lacy white dress. Weeks after First Communion is a very good time to die actually. I thank God she missed all the disgusting mess that was the 70's drug, sex and garbage scene.

Anyway...here's more on the catafalque:

"Catafalque, derived from the Italian word catafalco, literally means a scaffold or elevation, but in its strictly liturgical sense the word is employed to designate the cenotaph-like erection which is used at the exequial offices of the Church, and takes the place of the bier whenever the remains are not present. It is covered with a black cloth or pall, on which there is a cross either of white or some other colour (De Herdt, Praxis Sac. Lit., II, 328). The catafalque is usually placed immediately outside the sanctuary, and is the centre of the ceremonies of that part of the exequial office known as the absolution, receiving the same attention as the corpse would if present. Hence it is that lights burn around the catafalque during the function, and it is aspersed with holy water and incensed. During the absolution at the catafalque the cross-bearer should always stand between it and the door of the church, the celebrant or officiant being at the other end, between it and the sanctuary. When it is not possible for any reason to have a catafalque, its place may be supplied by a square piece of black cloth (pannus niger), which should be laid in front of the lowest step of the altar, and be sprinkled with holy water and incensed at the proper time by the officiant. Formerly the word was used to designate the bier or structure on which the corpse rested. No flowers should be used in connection with it, but it is allowable in the case of deceased prelates to mount their insignia to show the dignity, and in the case of nobles to display the family coat of arms, together with coronets, orders, and other insignia, to show the rank of the deceased. A very notable monument of this kind was that erected to the memory of Michelangelo by his brother artists on the occasion of his funeral in the Church of Santa Croce, Florence. "

Thanks for this thoughtful post. Best wishes for the feast of the 'Resurrection of Our Lord', the ultimate victory of good over evil, life over death.

You could have been speaking for me too. I have been thinking a lot of death recently. Thinking of how God has given me so many chances to get my house in order and I seem to be no nearer when I truly examine my conscience, though I have rectified some of the blatant misdeeds. I've just been re-reading about St Catherine of Siena - it's the sort of advice which is perfect for my present situation - hope it helps you too:)
Happy Easter!

"We have a serious disrespect and disconnect from death". Exactly.

Interesting is it that we see death in films and videos, presented to us in a "in your face" manner, yet rarely is it dealt with in an objective, "head-on" manner in real life.

Today, we live in a "Culture of Death" yet most are blind to the fact.

Yes, I hadn't thought of how death surrounds us in "entertainment" yet this is just that, entertainment. So it doesn't seem real. Nothing is more real than death.