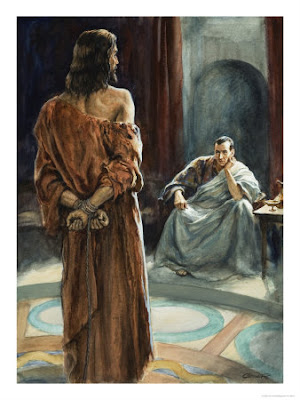 "WHAT is truth? That was the question Pontius Pilate posed after Jesus said to him:
For this I was born and for this I came into the world, to testify to the truth. 'Everyone who belongs to the truth listens to my voice.' "(John 18:37)
"Pilate’s question is the turning point, the hinge on which the door to Christ’s final passion was to be opened. Until that point, Pilate resisted handing Jesus over to death. But after Jesus identified Himself as the source of truth, Pilate caves into the pressure—to the alternate "truths" about the Lord—and decides to leave Christ’s fate to the people. Pilate washed his hands of Truth itself."
"If the body of Christ is to follow its Head in its own passion, what the Catechism calls "a final trial that will shake the faith of many believers" (CCC 675), then we too will see a time when our persecutors will ask "What is truth?" When the world will also wash its hands of the "sacrament of truth," the Church itself."
"Tell me brothers and sisters, has this not already begun to be the case in our day?"
Read the entire post HERE. Pray for perserverence. Amen+
Posted by Sanctus Belle at Thursday, December 02, 2010