Our Lady of Kibeho IV 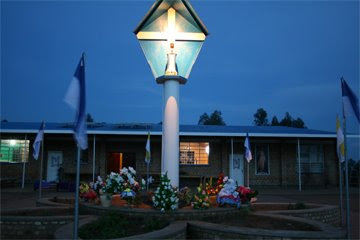 Dorm in Kibeho where Mary appeared

Mary will progressively make Herself known to the students, and win them over. She gives advice, encourages, makes remarks to bring them on the right path. She is really the Mother who, in Her motherly love, educates Her children. Our Lady really became the Queen of this school. She should be the Queen of all schools!
One knows that the present situation in schools worldwide is awful, because God has been chased out, because His law is no longer taught. It is even forbidden to pray to Him in schools! Every morning, when we go to Mass, our heart breaks when we see school buses arriving to school, loaded with children. Poor little ones, who are taught that God does not exist! Mary came to Kibeho in a school, to set the example to the whole world, and to show how students can be transformed when God's law is taught in schools.
Because of the strong opposition that the first Apparitions had caused, some teachers and students had said: “We will believe in the coming in our school of Mary, the Mother of God, only if She appears to others besides Alphonsine.” The seer replied to them: “Pray yourselves to obtain this favor.”
Posted by Sanctus Belle at Thursday, December 18, 2008

Labels: Our Lady of Kibeho